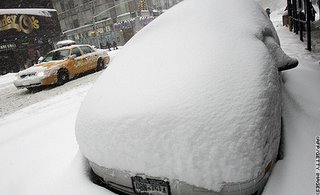 This is the scene around New York today as they were hit by a blizzard over Saturday night. My first and last blizzard was 83/84. I was a wee lad in NY with my mom as she pursued her first MSc. I had a ball, while the adults had a bawl.

It was great fun for us kids (7/8yrs old) not because school was out (the school we attended was quite open like all good Catholic private schools). We made snow angels on the fresh snow (dirty snow is like gutter water), had snowball fights, made a snow man...... helped some other kids actually. We had great fun with the occassion.

Winds were about 45-50mph tops if I recall the reports correctly. It was bitterly cold. We were wrapped up tighter than Muslim women (hope my house don't get bombed now) with just enough space for eyes to peep out. Visibility was terrible. We bounced into people more because we were gazing at the transformation of the landscape than because of the visibility. 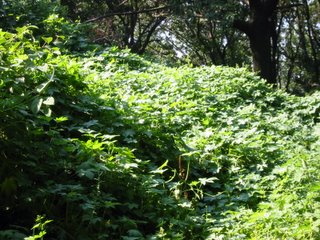 Just a few months before you saw green green grass. 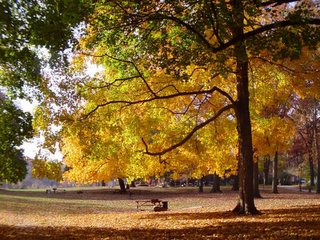 Then you saw leaves turn yellow and brown and orange.

I recall a science experiment for school, where we had to put out a plastic container with water and note each day as the temperature fell, what changes took place. I remember being quite pleased with myself when it froze. Up to that point I still had not seen snow and was not amused at being dressed in the layers of clothing and no snow to show for it. 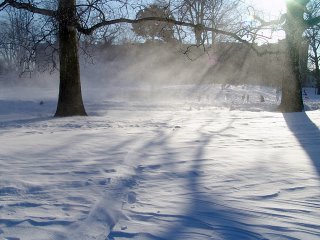 The first snow fall was a light layer that just barely covered the ground. I ran out in my long-johns with the intention of rolling in it; slipped my ass down the stairs and promptly went back inside. First lesson learned: this sucker comes wth ice!

I always find myself sighing nostalgically when I see the images on cable, just wishing I could experience it once again. Christmas 2004 I had my chance. It wasn't a blizzard, but sucker was cold as hell!! Lesson 2: it's nice to visit and experience it but everyday? Not a backside!

So how does a blizzard compare to a hurricane? I've experienced many near misses, flood rains from Cuba's delight and a few directs myself (Gilbert, Ivan, Dennis, Emily).

Roofs can cave in under the weight of accumuated snow. Water tends to run off and gather at lower areas. Snow stays where it falls... an equal opportunity disaster.

Blizzards are lazy. They lie down on top of you and try to freeze you to death. Hurricanes are over-achievers. They try to drown you, blow you away, chop you wid OPZ (odda ppl zinc), stone you, mud you, tear off you roof, change back river course, clear the land of foliage, start up new lakes, etc.... all in one felled swoop. That kind of attitude is why you have a hurricane season with names storms, while you sing about winter wonderland and go ice skating and skiing. Any ass out in a hurricane is fleeing a destroyed shelter, leaving his mistress yaaard to get home, or on their way to loot Courts.( "Let's see: stones on top of zinc...check, baby mada and yout dem wrap up inna di barrel.... check, is which Courts Leroy seh wi a go again? Baby, weh mi Moto RazR deh?") 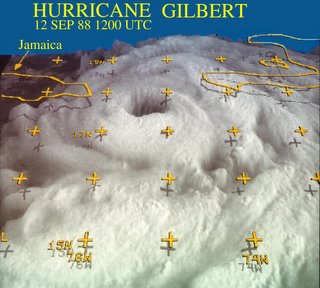 Gilbert was my first direct hit hurricane. I was looking forward to it. We had just returned from summer vacation late, the thursday before to hear that the Tuesday there was an earthquake and it had been dreadfully hot for the last week. None of that meant anything to me but my mom, who come from country, knew that meant some disaster was coming. Sunday after church, my mom noticed that there were no animals around. No birds in the sky and all was very still. We ahd no radio or television (both busted) so we didn't know a hurricane was approaching. A neighbour called us and asked why we weren't going shopping for items!

Ok?! So my mom rushed up to Papine and got what was left; 1 box of candles, 1 loaf of bread, 12tins of sardines (no bullybeef left on the shelves), some excelsior water crackers and some orange marmalade. The food there from before would have to suffice. We had kerosine oil and coal from before because between our temperamental electric stove and JPS, we did quite a fair amount of cooking on an old tyre rim around the back.

We had a lovely dinner and played Monopoly until 11pm, by which time the rains had begun. We were so excited. That lasted through the following morning as the winds whipped up everything and flung it at everything else. Our plastic chicken with her brood (lawn decorations) were slaughtered. We watched as winds peeled roofs off zinc and shingle. I laughed as an invisible hand plucked my neighbours roof off shingle by shingle in a straight line in a matter of seconds.

Then round di back a mi yaard start flood out. We had to tie a sheet over the grill to try keep the wind out because round the back had no door in front of the grill and the zinc part of the roof was threatening to leave. My peels of cruel laughter ended when my brother screamed that the roof over our room (shingle) was lifting. Having seen how the neighbour's own left, I ran like dickens and grabbed the end of the shingle at the edge of a gaping hole (about 2' x 2') and held on for dear life. This stopped the lifting, but I could feel the wind trying its darndest to finish the job.

So there I was standing on my grill over the window (too short at the time) holding my roof down, with my mother trying to convince me to let go and retreat into the other room to safety. I aksed her to get me something to tie the end down, which she did and only after i was convinced that it was tied securely did I let go. Gilbert howled and howled, but he got no more of my roof! 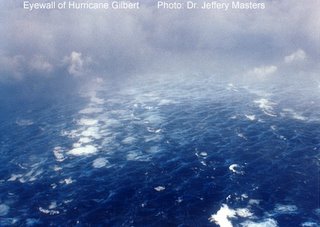 At intermission (during the eye) many people were rejoicing because they thought it was over I tried to tell them it wasn't but they refused to listen, until..... a slight breeze started again and then it got heavier and then the rains started again. Our pregnant neighbour had to be rushed quickly to another house because her roof also did the spiral dance.

The second half wasn't as entertaining as I had sobered up, recognising the very real effects of a hurricane. Subsequent hurricanes were kinder to my family and property, though not to everybody. The novelty having worn off I accepted what was happening and prayed that life would be spared for as many as possible. Property can buy back (tief again) no life is ever the same minute to minute.

There is no nostalgia about hurricanes for me; just an acceptance of what is. I want to go to Japan and Alaska to see their winters. I have no desire to visit Japan during their typhoon/hurricane season, nor Cuba during hurricane season (they have a natural affinity for hurricanes it seems). Earthquakes, Volcanic eruptions...... I'll watch on National Geographic!

Selah!
Posted by Bashmentbasses at 9:41 pm

That last pic is really cool.