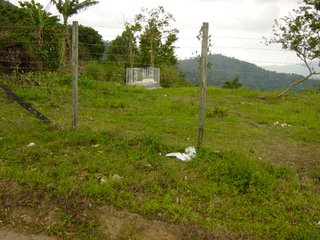 We have some land in the hills of St. Andrew in a district called Mt. Airy. You have to go past Stony Hill and turn off by Golden Springs which is on the way to Castleton.

My grandmother called me before she died and said she wanted me to use the land near the square to erect a clinic for the people in the district. "Ok" I said and so that has been the vision. I often joke about working in the country and being paid in food kind but I think that this clinic would realise that 'dream', so I'd have to open a small grocery store as well to pay the bills since JPS won't take yam and banana for the light bill.

This is what the land looks like now. Don't mind my grandfather in the corner...... I hope he won't mind the disturbance of his tranquility with commercial activity. 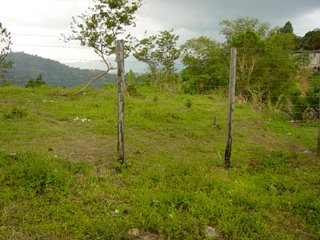 Why bring it up now, especially so prematurely? Well I got into a long conversation about the accomplishments of my family in the US (all there legally). Each doing what they want to do and enjoying life. My uncle has time share in a hotel...... I never even knew they did time shares in hotels! I thought it was just houses in the Hamptons and Lear Jets! Anyway, his family and my aunts all tend to have lovely vacations and stuff like that and own houses and seem to be managing their lives. I'm happy for them. It doesn't hurt that their prosperity results in largesse for me.

God has been great and faithful!

So they want to know what are my plans for life. So I shared my vision and now I am here wondering about it and its reality.
Posted by Bashmentbasses at 6:14 am

Don't lose the vision. You have the ability and the drive to get it done.